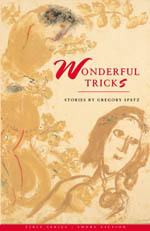 I dated a woman, once, whose twin sister was a fool. At night I’d go to their house. I’d sit on the porch and the sister who took care of the one who couldn’t speak or tie her shoes, would bring out food—potatoes mainly, stuffed with tuna fish or sour cream and bacon bits; sometimes sticks of celery with salted peanut butter or baba ganouj wedged in their crevices. I drank a beer and ate the food on a porch swing, watching the women come and go. They were medium height and had sharp, Irish features, long eyelashes, and red-brown, shoulder length hair. They were pretty. One eye opened slightly wider than the other, giving you the impression they were amused or skeptical, even when they weren’t, and they used a kind of cream on their skin I loved. The cream had a smell to make you think you’d never been alone in your life and never would be alone again, it was that soothing.

The sister I dated was Marie. The one who couldn’t talk or tie her shoes was Sarah. I had a thing about their feet. They were the prettiest feet I’d ever seen. Marie’s toes had knuckles on them like fingers, not one digit bent out of shape or squashed into its mate, and the nails were all clean and evenly cut, creamy, like the skin of some cactus fruit. She wouldn’t admit her feet were nice, though secretly, I think she knew. She never slept until she’d washed them first in the sink by her bed, dried them and put on a pair of clean, colorful socks. Every night I’d hear the taps go on and the water splashing and then I’d lift my head a little to see her there in the dim light, her eyes half lowered, her leg up in the sink basin and a towel over one shoulder, scrubbing. “Stanley. Wake up now,” she’d say when she was done. “Time for you to go.”

I met them making a bid to paint the outside of their house—a scabby red Victorian with porches front and back, in the oldest part of town. Right away I saw how much work it was going to be. There were loose boards all over, rotten boards, exposed wiring, and the ceiling of one of the porches was split and sagging into the middle, leaking hundred-year-old dirt and cobwebs onto the floor. That would have to be repaired before anyone went at it with a paintbrush.

I pointed out everything I saw. “Scaly,” I said, touching her porch railing. She nodded her head and listened indifferently, as if she knew all this already. A pack of Camels in her front shirt pocket pulled her shirt down. The skin between her breasts looked broken out, and she had on a bra with lacy trim. I tried not to notice this or the rips in her jeans, two torn crescents just under the rear pockets that winked open and shut as she walked ahead of me.

That day Sarah was seated at a big table in the living room, construction paper spilled around her in little cut pieces, and paintbrushes in plastic cups and coffee cans. Her eyes were as blank as a blind person’s and she was caressing one hand with the other, staring at something on the wall.

“Measles with encephalitis, when we were thirteen,” Marie told me. “She’s all right, she just can’t take care of herself. I’m mom and nurse and big-sister rolled into one. Like I don’t get enough of taking care of people!” She went on to explain how she was a nurse, on-call every weekend for a home-care hospice agency downtown. I tried to picture Sarah’s face covered with measle scars. But there were none: she was Marie, precisely, down to the spiky eyelashes and the shine in her skin.

“It’s for people who are dying. We take care of them so they can die in their own homes, peacefully.”

“Sounds stressful.” My last girlfriend had been a nurse. She always talked about how hard the work was—coming home at six in the morning and dreaming all afternoon about people barking at her and urinating on the floor. It was sort of what broke us up: that I wasn’t willing to move in together after a year of dating and she was tired of trying to juggle me with her schedule.

Marie frowned like she thought I was being deliberately dumb. “It’s about the easiest job I’ve ever had. We’re not trying to save anyone’s life.”

My bid came in at the highest. But I had purposely bid high, since her house was such a headache and wouldn’t be worth my trouble unless it paid well. “I’m really sorry,” she told me on the phone, a week or two later.
“Nothing to be sorry for,” I said. “Happens all the time.”

I heard her suck on her cigarette. “But you must have been wondering.”

“All part of the game,” I said. I asked her who she’d ended up hiring and she mentioned a couple of Vietnam vets I knew from having been underbid by them before. “Very good, very good,” I said. “You be sure and call again sometime if you want something painted.”

I figured it was the last I’d ever hear from her, but a month later she called. “I’ve changed my mind again on the color for the front and back doors and those men say they can’t do it. They have another job.” She inhaled furiously and I imagined smoke curling around her forehead and sticking to her hair. She blew out into the phone. “Truth is I think they can’t be bothered.”

“So, what do you charge for something like that?”

I told her I’d have to come out and have another look.

That time it was just before dark and she was dressed more like a regular person, shorts and a denim work shirt, no half-revealed parts of her body to avoid looking at. Her legs were stringy, muscular-seeming, and I could see the veins in her shins. I imagined those veins saturated with cigarette smoke, nicotine breaking her blood cells and making the blood thicker or thinner, I didn’t know which.

I was about to start a job for an apartment complex on the other side of town and doing her doors in my spare time would be no problem at all. “I’ll stop by in the morning, throw on some primer, touch up those hinges. Then on my way home I can stop off—do your first coat of enamel. Shouldn’t take but a couple of nights. Two coats, maybe three.” While I was talking she unbuttoned the lower buttons on her shirt, slid in one hand and began doing something—rubbing and pinching herself, I think—staring distractedly over my shoulder. I couldn’t concentrate anymore. I was conscious of my heart punching erratically. I heard my voice drone on. “Shouldn’t be too much of a headache. I’ll stay out of your way.”

“Let me ask you something,” she said. “You look like a sensitive man.” She blinked and smiled hard, like we had agreed on something funny. “The type to take another person’s needs,” she paused seriously, “as significant.”

That’s when she spelled out everything she had in mind for me. It wasn’t like anything I’d ever heard before, and for some time I didn’t know what to make of it. Never in my life had anyone come on to me like this. “A woman,” I was thinking. “A woman!”